I spent the last few hours of a waning 2012 with my son Simon’s hockey team.  Not on the ice, but instead in the nondescript, suburban warehouse where his Squirt hockey team was volunteering for a service project.  In just a couple of hours, Simon and his teammates (and the dozens of other volunteers who were there that afternoon) packed more than 5,000 packets of meals for children in Haiti.

It was a small act, but it will have a tangible impact on the lives of some others, kids we don’t know and will never meet.  On the way home, with the radio droning on about Congress and the looming fiscal cliff, Simon talked about what he had learned that afternoon about malnutrition and hunger.   “Don’t you think that was a good time?” he asked.  “I feel good about doing something to help out.”

It reminded me of one of my favorite lines from the movie Willy Wonka & The Chocolate Factory.

“So shines a good deed in a weary world. ”  ~ Willy Wonka

In looking up the quote, I realized that it in fact a reference to a line from the Merchant of Venice.

“How far that little candle throws its beams! So shines a good deed in a naughty world.”  ~ William Shakespeare

I don’t usually make New Year’s resolutions.  I figure if something is important enough to take action, I should just do it regardless of the time of year.  But this New Year’s Eve volunteer experience with my son, while brief, makes me think that I should make a resolution for 2013.  This year, I will be on the lookout for opportunities to do good deeds, both small and big, at home and abroad, acknowledged and unacknowledged.   In 2013, I resolve to see how far a little candle can throw its beams. 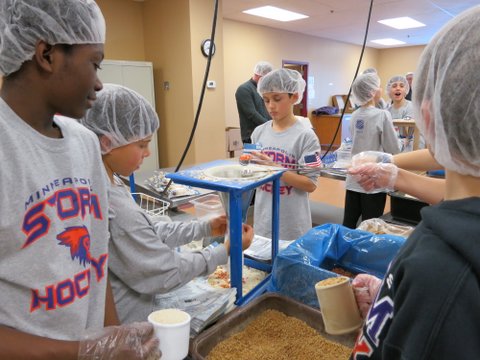