Nestled between the Lakes Region and the White Mountains of New Hampshire, the Town of Sandwich is classic New England. Settlers began moving up from Boston in the 1760s and the town was incorporated in 1763. It was named in honor of John Montagu, 4th Earl of Sandwich, said to be the inventor of the sandwich.

By 1830, Sandwich had grown to a population of 2700.  During the 1800s, the town contained stores, churches, schools, carpenters, blacksmiths, and wheelwrights, with farms and mills in the surrounding area.  Because the railroad never came to Sandwich and farming was difficult (New Hampshire is called “the Granite State” with good reason), the population declined after the Civil War. Sandwich, which includes part of Squam Lake within the town limits, began to be an attraction for visitors, summer residents and artists.

Take a tour with me through the Center Sandwich Historical District and surrounding areas. 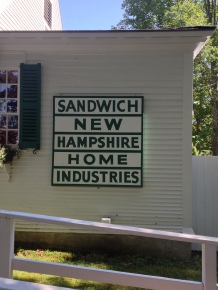 The League of New Hampshire Craftsmen began in Sandwich as “Sandwich Home Industries” in 1920, and continues statewide today

Many old cemeteries in the area are a reminder that the population used to be much larger.

Many historic houses are now bed and breakfasts.

Granite is often used for utilitarian purposes – including signposts!

Many of the buildings in Center Sandwich are Federal and Greek Revival in style.

Sandwich is on the National Register of Historic Places. 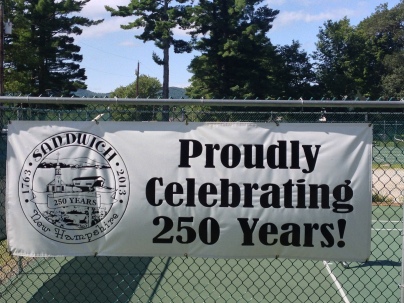 Sandwich celebrated its sestercentennial in 2013.

The Corner House Inn in the village center.

Signs show the businesses in the area.

Many families have long histories in the area.

But here’s my favorite sign.  I wonder what it says?

This post is in response to the Weekly Photo Challenge:  Signs. See more responses here.

3 thoughts on “The Signs of Sandwich”