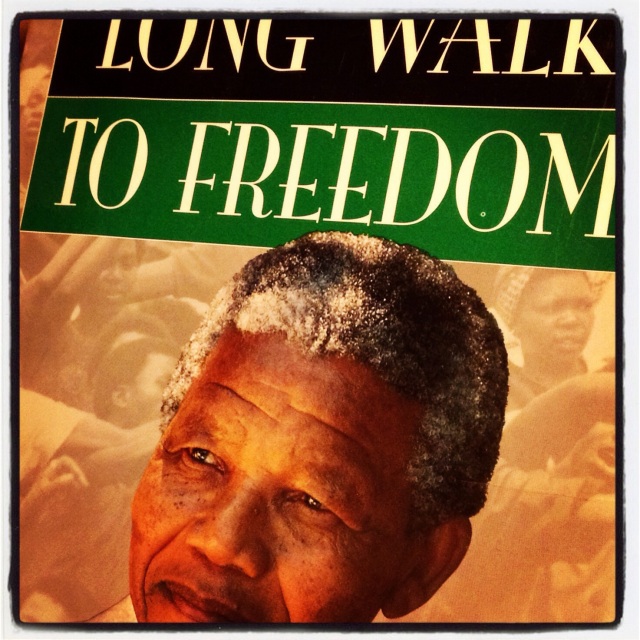 “No one is born hating another person because of the color of his skin, or his background, or his religion. People must learn to hate, and if they can learn to hate, they can be taught to love, for love comes more naturally to the human heart than its opposite…

Man’s goodness is a flame that can be hidden but never explained.”

For many years, I have kept a copy of Nelson Mandela’s autobiography Long Walk to Freedom on my bedside table.  I don’t keep it there because I am in the process of reading it (I have read it twice), but because I keep the words of this great human rights hero in my heart.   I like waking up in the morning and knowing that it  is there.   Sometimes I just lay there and look at the title on the binding for a few seconds.  It helps me remember the good in this world.

Long Walk to Freedom was published in 1995, just a few years after Nelson Mandela was released from his nearly three decades of imprisonment on Robben Island and Pollsmoor Prison for leading the ANC.    I was in law school at the time.  I think that when  I first read it, I was especially looking for information from his early years about how and why he became a human rights warrior.  (Yes, Nelson Mandela was a lawyer, too.)   I love that as a child, he was called  “Rolihlahla” , which means “pulling the branch of a tree ” (i.e. “troublemaker”).

Here are a few of the things that he wrote in the book that rang true for me.

“I had no epiphany, no singular revelation, no moment of truth, but a steady accumulation of a thousand slights, a thousand indignities and a thousand unremembered moments produced in me an anger, a rebelliousness, a desire to fight the system that imprisoned my people. There was no particular day on which I said, Henceforth I will devote myself to the liberation of my people; instead, I simply found myself doing so, and could not do otherwise.”

“I have never cared very much for personal prizes. A person does not become a freedom fighter in the hope of winning awards.”

“I am fundamentally an optimist. Whether that comes from nature or nurture, I cannot say. Part of being optimistic is keeping one’s head pointed toward the sun, one’s feet moving forward. There were many dark moments when my faith in humanity was sorely tested, but I would not and could not give myself up to despair. That way lays defeat and death.”

Tonight, when I heard the news that Nelson Mandela had died, I was not surprised.   Nelson Mandela was 95 years old and had been ill for a long time.  His human body had become a painful prison from which his soul deserved freedom.    I remembered that he had written about freedom in his autobiography.  I don’t know which parts of  Long Walk to Freedom were written clandestinely on Robben Island and which were written after his release, but long-term detention must have had an impact on his views of freedom.  When Nelson Mandela talked about freedom, it was not limited to his own person.  Rather, for Nelson Mandela, freedom was inextricably linked to the freedom of other human beings.

“For to be free is not merely to cast off one’s chains, but to live in a way that respects and enhances the freedom of others.”

Freedom from imprisonment was not the end of the story for Nelson Mandela.  It was only the beginning of his work in leading South Africa towards a new, post-apartheid era.  What he says about leadership  in Long Walk to Freedom is also instructive.

“A leader. . .is like a shepherd. He stays behind the flock, letting the most nimble go out ahead, whereupon the others follow, not realizing that all along they are being directed from behind.”

“A Nation should not be judged by how it treats its highest citizens, but it’s lowest ones”

When Nelson Mandela wrote his autobiography, he still had many years left in his long life and many miles yet to walk.

“I can rest only for a moment, for with freedom come responsibilities, and I dare not linger, for my long walk is not yet ended.”

Your long walk is ended now and the world is a better place because of it.    Rest well, Rolihlahla!  I will keep your words in my heart and –  on my bedside table.

While I understand that a movie based on the autobiography has just been released, I hope that others will take the time to read Long Walk to Freedom.   Nothing can inspire admiration of this great human rights leader than the words written by Nelson Mandela himself.

12 thoughts on “Long Walk to Freedom”